A quick post updating you on recent things that have been revealed within the Marvel realm! (You know the deal by now!)

First look at Black Panther in set photos from the upcoming Captain America Civil War:
Notice on the first photo there’s the Winter Soldiers stunt double too… Hinting that these two will be having a not so civil war. 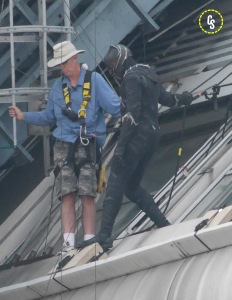 Doctor Strange has been said to be “Marvels Fantasia”, hinting at its psychedelic visuals:
The films cinematographers have quoted this themselves. Concept art of the Sorcerer Supreme has been shown to a handful of people too. Although the art itself can’t be found on the internet, the people able to see the concept outfit have said that it is more plain than the one in the comics.

Possible Spider-Man (first) outfit reveal:
Okay so the concept art isn’t confirmed to be official in anyway… and the alleged leaked screenshot of a wall climbing kid is also not confirmed. Hopefully it’s not fake but who knows. People are saying that Tony Stark will be bringing him in and offering a costume upgrade. Possibly the Iron-Spider?

D23 Expo to reveal Captain America footage?:
A Disney Expo is happening tomorrow (14th August) until Sunday (16th August). It has been confirmed that people will see footage (and more) for the upcoming Civil War. Hopefully this means the public get their first teaser trailer of some sort? Keep your eyes peeled!

Deadpool Red-Band and Green-Band trailers (if you haven’t already seen them somehow):
https://www.youtube.com/watch?v=FyKWUTwSYAs

No-one likes Fantastic 4 by the sounds of it but they’re still forcing a sequel:
Yeah…